Backdrop: Worlds Within Our World

Mundania: This is the non-magical, everyday world in which most people live their normal, mundane lives. Most of the people in it have no idea of the Veil or the magical people that lay hidden behind it, which keeps witches and wizards, and all manner of other fae creatures, safe from harm or the need to cause it.

Magehold: This is the collective name given to all magical lands in this story world, though due to their nature most of them are only to be found on dry land. Veiling spells, which conceal magical realms from the Mundanes, are usually not able to exist within or above water, except in the case of the merfolk because King Poseidon had managed to tweak a Veiling spell to conceal all of Atlantis beneath the ocean, though not without rumors of this event creeping their way into the lore of the Mundanes. Unlike Mundania, where humans tend to pollute the Earth, Magehold is a much cleaner place that uses natural resources in a renewable manner, and its inhabitants seldom if ever litter.

Dragonhold: Centuries ago, dragons existed in the human world, but during a great war their alliance with the humans was destroyed and it was decided by all parties involved that they ought to go their separate ways. The dragons were thought to have all retreated beyond Dragon's Gate, to exist in a dimension of their own making which had existed there for centuries beyond reckoning. However, not all the dragons retreated, though for a very long time this was something the world of men did not know.

How it all played out

With the dragons gone, humans were left to exist, but peace had not yet been reached. The Mages, unable to tolerate the attitude of their non-magical cousins, invented Veiling Magic, a way to continue to exist in the human realm, just within a hidden dimension that occupied the same space. The only trouble was they soon discovered their crops would not grow, and their sheep grew so powerfully imbued with magic that they could not be shorn for wool. Unable to exist without the help of the Mundanes, but knowing they would not help willingly, they were also forced to create compelling spells to get help from them. For centuries the two worlds continued on without much difficulty, until one fateful day when a young wizard came very close to destroying it all...

Of Stones and Tomes

Stones of the dragons are created magically, usually as orbs that would fit in the palm of a human man comfortably, or seem a little bulky to a young woman like Felicity, being approximately 20cm in diameter.

Dragon tomes, while in the human realm, appear as large leatherbound books, often held shut with a strap, though Felicity's book is not nearly so big and looks to have been made in the human realm rather than dragon. The main difference, as will be seen when a dragonmade book appears in the story, is that her book probably has only two hundred pages, while theirs hold over a thousand and need that strap just to stay shut. However, mages do not find the books to be heavy because they'd be buoyed by their magic, whereas a Mundane could not lift nor open one at all. 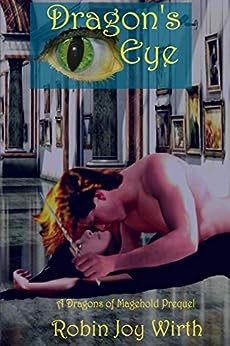 Welcome to Magehold, another dimension hidden from the eyes of the Mundane world where magical people thrive. In this first book of the series, Felicity Lake's world collides with that of dragons constantly, but she never expected them to completely merge. Apprenticed to the handsome and famous wizard, Lancelot Jones, she begins to learn skills she'll need to function as an adult within their world.
But her advanced education is hardly the first thing on her mind when faced with such sexy green eyes, or an attraction which takes her completely by surprise. Given a mission to seek out the Grimoire Draconis— a magical tome guarded by an ancient dragon within a mountain stronghold, Lance is quick to point out that they've never spent a night alone. But is Felicity ready to explore?
The temperature's rising in this delightful remake of Terratica's Talisman. Enjoy!

As a secondary note, it should be mentioned that although Dragon's Eye does not contain much in the way of sex or descriptive text where it is concerned, the heat level will notch up a bit as these books continue...